This company came out of nowhere, went on a direct listing and caught everyone by surprise.

I remember the marketing was that this company helped the US government catch terrorist. At least that was what I remembered. I was a bit turned off by it. This made me lose out on looking at this company at the initial very low prices.

Nevertheless, after an extensive review on the company, I decided that this is a company that one must have for a long-term investor.

Part 1 – What the Company Does?

So the company is Palantir Technologies.

I believe a lot of people do not invest in Palantir because they do not understand their business and product. I agree it is hard to understand the products they sell. Thus, let me use some human language to explain the company to you.

On the other hand, let me explain about the company to you.

There was once, I watched an interview on Alex Karp on Youtube and he mention 2 points that caught my attention. (1) When Alex Karp mention that his product is to continue to create jobs and to allow everyone in the company to use it, from the CEO to the blue-collar worker on the ground, and to benefit from it, (2) He also mention that many of the SaaS platforms is trying to replace the manual jobs but that is not what he wants to do.

After hearing these, I am like GIVE ME THE SHARES NOW!

Part 2: The Segment of Fundamental Scorecard That Caught My Eyes

Fundamental Scorecard is a visualization tool that simplify all quantitative information into graphs while calculating the intrinsic value using timeless theories, and providing conclusions about the company for the reader to have an easier time to make decision. 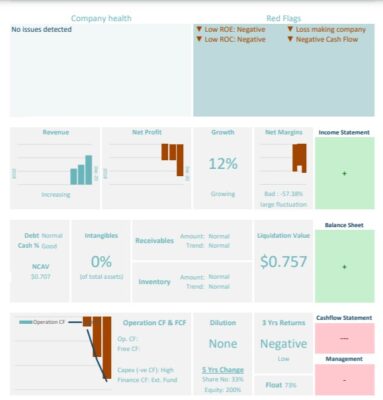 Basically, Palantir is like a new listing. Thus, we do not have over 10 years of financials to review. However, the main characteristic that caught my eye was (1) the revenue was growing at a higher rate and (2) the company did not have any issue in its company health.

With that, I decided to go ahead to do an in-depth qualitative analysis using USCCR Framework.

Part 3: My Qualitative Research with USCCR

Similar to Fundamental Scorecard, USCCR is my own simple way of doing Qualitative Research. Qualitative research is important because it Builds Conviction of a company you are intending to buy or is holding, even if the whole world is against you. It will Reduces the chances for you to make Rash Decisions that you may regret later.

Understand The Business – As per its latest 10K revenue breakdown,

Scalable / Macro Trend – It’s all about Big Data analysis. The fact is we don’t know what we don’t know – this is where, at times, Big Data provides you a different perspective and it will either allow you to make or save much more money!

This will allow companies to run more efficiently. One of the main issues is the companies want to find out where their blind spots are, especially the Fortune 500 firms. The TAM, by statista, is about 64bn in 2021, 70bn in 2022.

Competition – In my opinion, SaaS users may have to change their business model to suit platform. Palantir, on the other hand, improves platform to help customers. When they solve a problem in a certain industry, it also tends to help other customers in same industry.

After many discussions and searches, my opinion is that Palantir do not really have a competitor. The closest existing competition/company could be Salesforce.

I don’t think there is another platform out there that can assist the US army to catch terrorist. Other than the Self-develop option.

Catalyst / Future Growth – Recently Palantir announced that they will provide their platform for free to countries and companies to cope with the recovery from the Covid-19 pandemic. The fact is that Palantir platforms are very sticky and will definitely have short term expenses effect along with long term significant revenue gain.

Another catalyst is their partnership with IBM and Palantir could tapped onto IBM 2500 direct sales force.

The FY20 presentation provided the following:

TL;DR: No competition, platforms are super sticky, almost monopolized the platforms in the US govt and potentially all its allies govts, increasing average revenue per customer, significant future growth

After such an in-depth study of the company, I personally think that this company will definitely have a chance of being a multi-bagger.

Enough said, I will be adding this company to my portfolio – making it one of the core positions to the initial few I mentioned.

The above is re-produce from TUBInvesting Blog with some amendments.